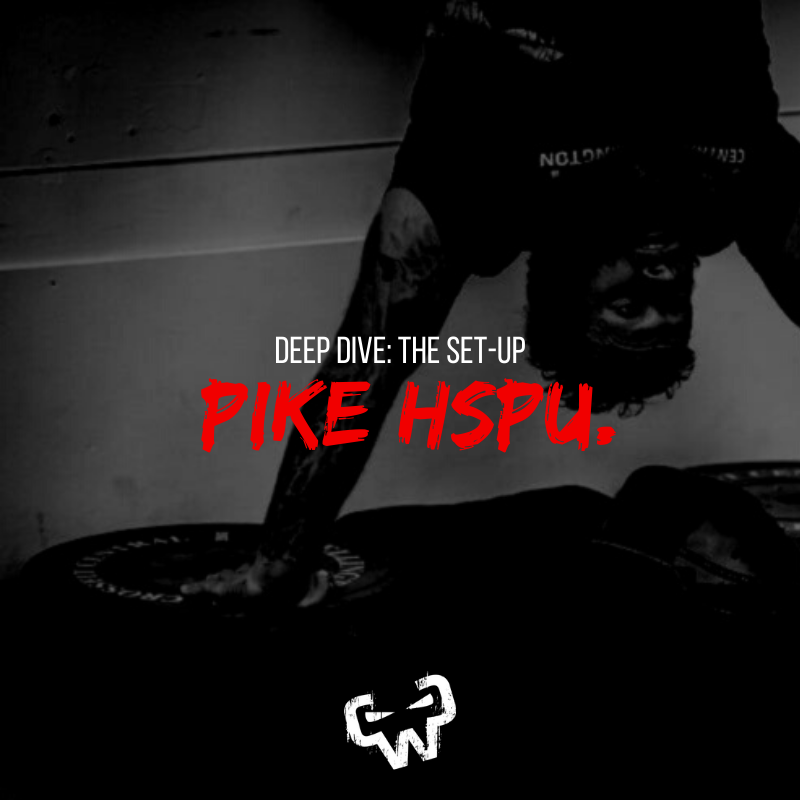 Pike Push Up – How to set up for success

Handstand Push Ups are an iconic CrossFit movement that are fun to do but a challenge for many to master. Somewhere in the journey to achieving a HSPU, or perhaps in the fury of warming up and selecting scaling options for a workout, most athletes have been introduced to the Pike Push Up (aka Pike HSPU) as a progression that is harder than a regular Push Up but easier than the HSPU.

This is only partially true and a source of confusion. The Pike Push Up is easier than the (strict) HSPU in that it isn’t quite full bodyweight, can accommodate a greater range of overhead angles (i.e. works for those who have trouble reaching the top of the HSPU) and has much less of a balance component. But it is also can require more strength than a kipping HSPU when done with a proper set up and full range of motion.

Here is what a good Pike Push Up looks like:

There are three common faults that occur when athletes complete their Pike Push Up.

1) Hips aren’t high enough – sometimes hamstring flexibility will be a factor, and sometimes it’ll be body awareness, but many athletes will only fold a little and end up in more of a declined push up position. We want the hips to be stacked over the shoulders as much as possible (this is the ‘Pike’ part) so that we are loading the shoulders more like an overhead press rather than relying on the chest as in a standard a push up.

2) Not leaning forward – the amount of load that bringing the head forward of the hands (during the decent/at the bottom) puts on the shoulders is dramatic. Many athletes will be uncomfortable or at least unfamiliar with this, so they flair their elbows off to the sides and drop their head between their hands. This defeats the purpose of this progression to a strict HSPU as it is no longer practising the movement pattern needed for the more advanced version. i.e. you won’t be able to balance in a handstand like that so it won’t help you get better at it. But more likely to be of concern is that it is a less stable pressing position – you won’t see heavy Jerks or Thrusters done with elbows out!

3) Using legs to assist – this isn’t so much of a fault as it is a hidden scaling option. Many athletes will do this without realising, but pressing the knees (if on a box) or toes down, or hooking the toes behind the box and pulling back, both help shift the centre of gravity back behind the hands and engage the hip flexors and core to assist with the press. This is 100% valid if done intentionally and in a measured way in order to provide the right amount of challenge. But if you burn through Pike Press Ups and struggle with HSPU then this might be the reason why.

So whether you’ve nailed the HSPU or still on your way, it might be time to revisit this movement and make sure you’ve gotten the most benefit from it possible. Take the time to get set up correctly, be aware of your movement pattern, and if you need help ask a coach for some fine tuning. Give this progression the time and respect it deserves and you’ll be rewarded with head-turning HSPU strength!