How I got my volunteer t-shirt 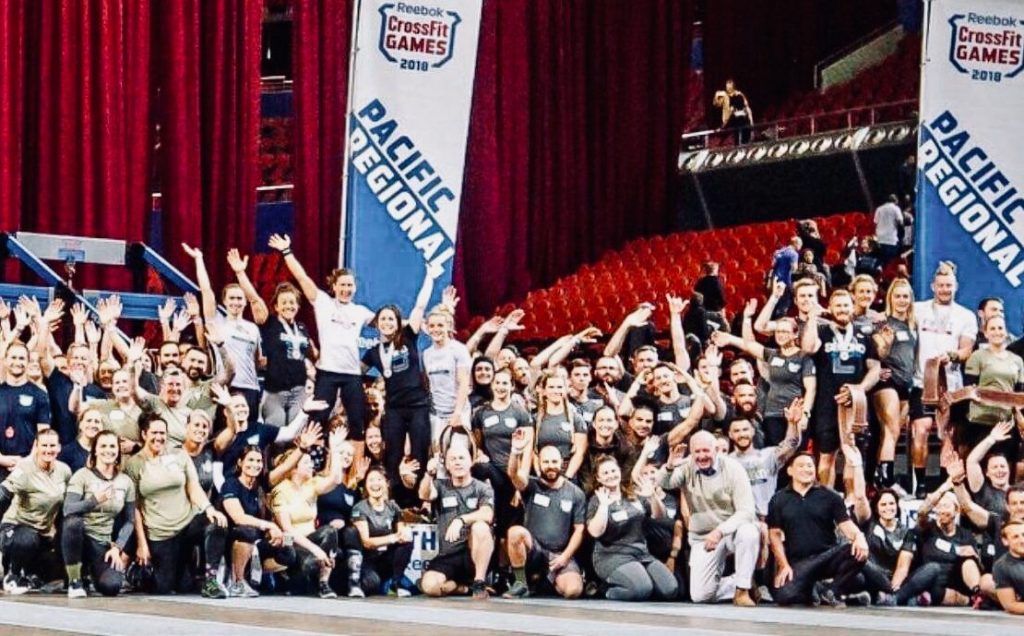 How I got my volunteer t-shirt

I joined CrossFit Central Wellington and the CrossFit community in September 2017, and you could say I drank the CrossFit Kool-Aid. Its been a whirlwind of fun, excitement, high-fives and fist bumps and I haven’t looked back since. In fact, its snowballed and now I think my friends are staging an intervention.

For those who are unfamiliar with competitive side of CrossFit, here is a basic run down. The CrossFit Games are the world’s premier test to find the Fittest on Earth. They are world-renowned as a gruelling test for the toughest athletes on Earth as well as a thrilling experience for spectators. The Games season is broken up into three stages. The first stage is the Open. This five-week, five-workout competition is held in CrossFit affiliates and garage gyms around the world. The results from the Open determine the top 40 Men, Women, and 30 Teams from each region and they qualify for Regionals. In the Pacific, the best from Australasia and Asia meet up – this year at Olympic Park in Sydney – to battle it out for only 5 spots in each division at the CrossFit Games! The season culminates in the 2018 Reebok CrossFit Games. At this point, the field has been whittled down from hundreds of thousands of athletes in the Open to the world’s fittest 40 men, 40 women, 40 teams, 80 teenagers, and 240 masters. The CrossFit Games rank the world’s fittest and determine who is the Fittest on Earth. 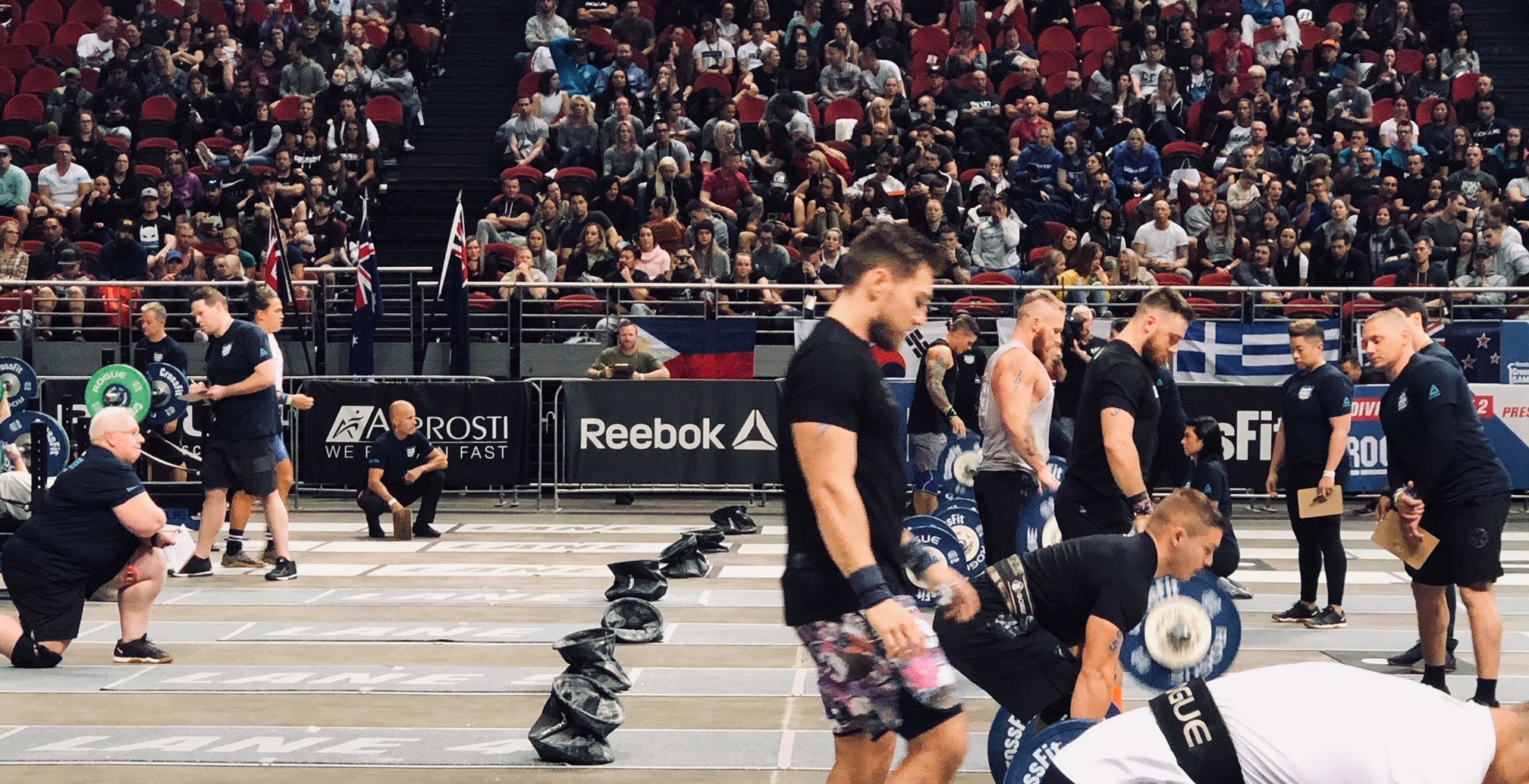 You might think I’m crazy but finishing 97,246th in the 2018 CrossFit Open didn’t deter me from joining over 500 others in applying for 200 Volunteer positions at the Pacific Regionals 30th may – 2nd June in Sydney. I was lucky enough to nab a spot on the Special Assignment Team. What this important sounding job entailed, I wasn’t so sure. I was volunteering the Thursday, Friday and Saturday so I flew to Sydney on the Wednesday. Seemingly winter doesn’t really happen there because it was sunny and beautiful. From the airport I purchased an Opel card with $40 on it, which got me on every bus and train I needed to get around Sydney during the whole trip. After a Yin Yoga session at Bondi beach, I found an Airbnb close to Olympic park and prepared for an early morning and few hard days work.

On Thursday I realised just how huge Olympic park really is, I arrived way too early and thought I was in the wrong place because there was no one in sight for the next 30 minutes. I did make friends with a couple birds but didn’t catch their names before they flew off into the Sydney sunrise. Thursday was a blur, I didn’t do any special assignment, I basically walked around helping and chatting to crews at my leisure. I laid out the “Worms” for the team events, put distance indicator decals on 30 floor mats (100-4700m), put weights on bars, stacked and ordered the names in order of heat appearance and made sure everything was set up perfectly for the events on Day 1.

Each team had a leader who was kitted up with walkie talkie and a thick booklet on how exactly everything needed to be laid out. The floor and set up needed to look the same across the regions even down to the size of the cable ties used on the signage banners. The whole floor needed to change multiple times per day with mens, womens and team events running back to back so it was pressed on us that we needed to be serious, listen and act with military precision or else our wristbands and t-shirt would be taken away and we would be off the team! (Nooo not the t-shirt!) 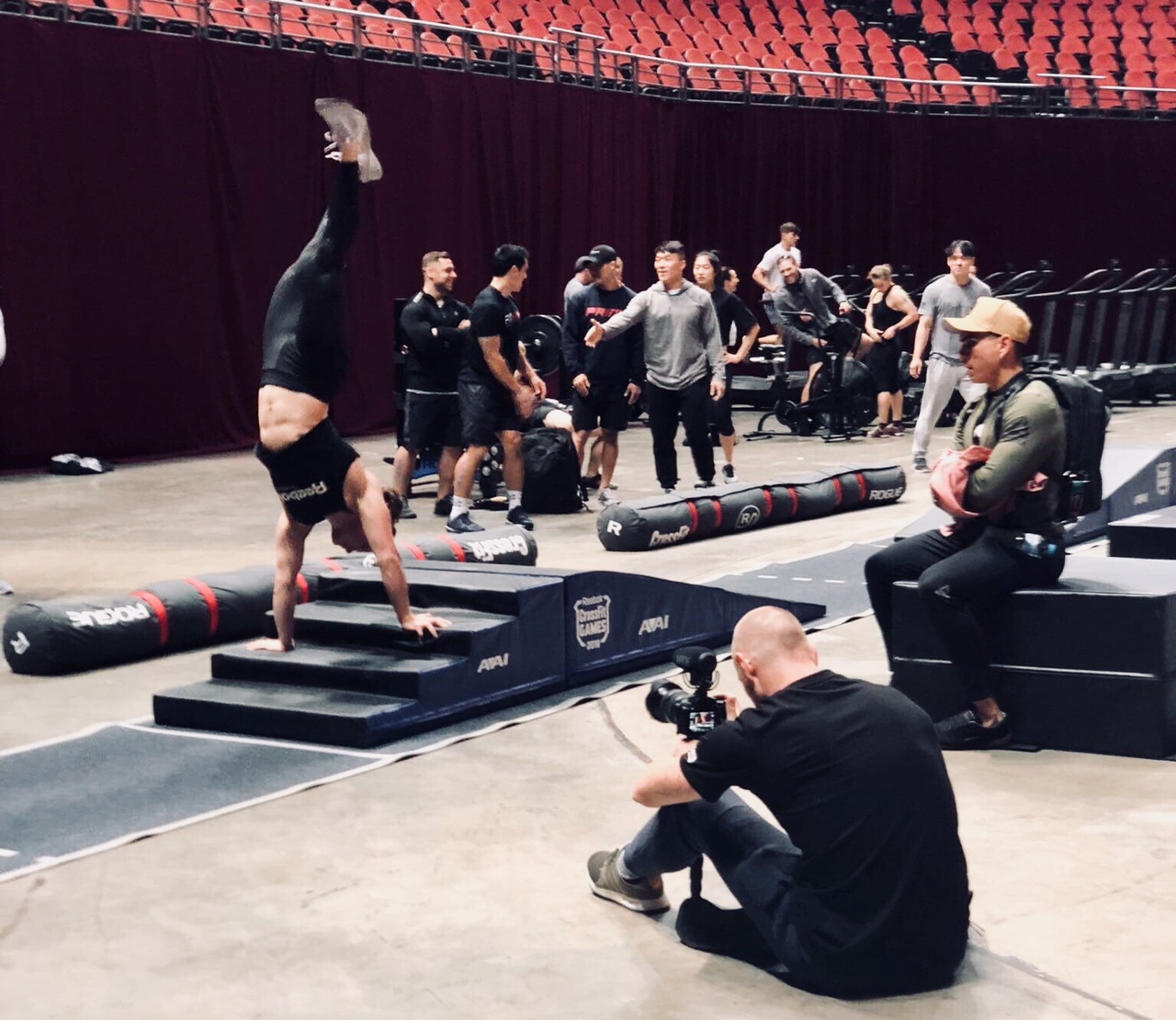 Friday the vendors were all set up and ready to go, so naturally I skived off work to go and check out the Reebok and Rogue stores, discovering The Wod Life, Stance, Again faster and The Chief Life too! I’m building up a sweat just thinking about it. I was in heaven; the whole trip had been worth it especially after being mistaken for an Athlete.

I ended up being assigned to Ladder Crew. In between every heat the 10 name placards on the rigs needed to be changed. How many CrossFitters does it take to change 10 placards for time? 10 Crossfitters to be precise. Two teams of 5 dividing the lanes in half. I had the esteemed position of ladder holder. We were timed every heat and had to improve each run attempting to beat the all times games record of 43 seconds. The closest we came was 58 seconds.

[blockquote style=”boxed”]How many CrossFitters does it take to change 10 placards for time? 10 Crossfitters to be precise[/blockquote]

We worked 12 hours each day, it was stressful and taxing but we were fed 3 paleo friendly meals per day, Salmon, bok choy, Lemongrass Chicken with Cauliflower Rice etc, which was great because I was flat broke after spending all my $$ at Reebok. In the evenings we could train in the warm up area. There was a general buzz in the air because we were using the same bars as Tia and Kara, needless to say we all hit PBs that night.

There was an appreciation dinner for the volunteers on Saturday night and many Instagram handles were swapped with promises of follow backs and likeforlikes.

Sunday I flew back to Wellington feeling inspired and wowed by the scale and execution of such a huge event. Usually being I’m a punter on the other side of the event and I didn’t realise how much set up and coordination happens in the week leading up to the Regionals weekend. ALL the weights, rigs, equipment, set up gear, signage and even the boxes for box jumps are shipped over from the USA. Volunteers fly over at their own expense to join medical, security, volunteer control, signage, gear set up and special assignment squads. It was an amazing experience, worth it just for the Event Team t-shirt.